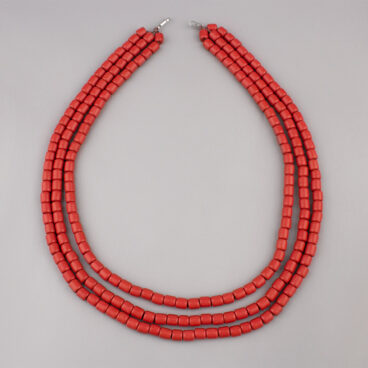 Handmade ceramic beads in Ethnic style in traditional red color. Beads for the necklace are made of pottery clay. All beads are kilned and painted by hand.

Ceramic beads are light, so they will be comfortable to wear even in three rows. Thanks to the small beads, they fit evenly and beautifully around the neck.

A necklace is one of the oldest women’s adornments in the territory of Ukraine. In Ukrainian culture, they were not only a decoration but also had a symbolic meaning.

The first necklaces were made from stones, grains, shells. Later they were replaced by metal, glass, or ceramic beads. Even later, were popular expensive natural materials such as coral, amber, pearls, pomegranates. But only rich women could afford such adornments. With the number of tiers of the necklace, people could understand how rich their owner was. There could be from three to thirty tiers of beads.

Previously, women did not go anywhere without neck adornments, because they were considered a talisman that protected them from evil spirits and unkind people.

The color of the necklace was considered additional protection. Red is a symbol of vitality, health, passion, activity.